Collective Bargaining Strategies and Negotiations with Trade Unions in Uganda

Collective bargaining is the process of negotiation that takes place between Trade Unions (Labor unions) and Employers. Representation by employers in most cases is by management who may come along with Board members in certain organizations.

Collective bargaining takes place in respect of the terms and conditions of employment of employees such as remunerations, working conditions, grievance handling procedures, and the rights and responsibilities of trade unions.

In Uganda, this collective bargaining process is guided by the National Tripartite Charter On Labour Relation Housed at The Ministry of Gender Labour and Social Development (MGLSD).

What Is a Trade Union?

A Trade Union is a voluntary, democratic, continuous, and independent workers’ organization formed, financed, and run by workers themselves. It organizes, protects, and advances the interests of its members. The main objective of a Trade Union is to get the best possible living standards and working conditions for its members.

On the part of the Trade Union, members should be conversant with the labour laws. Article 29(e) of the Constitution of the Republic of Uganda specifically provides for the workers’ freedom of association; to form and or join any labour union of their choice and collectively bargain.

Article 40 of the same constitution mandates Parliament to formulate laws to protect the rights of persons to work under safe and healthy conditions, equal pay for equal work done, rest days, and reasonable working hours, and withdraw labour under the law.

For that reason, labour unions have to be equipped with knowledge of the labour legislation of Uganda like; The Employment Act 2006, Labour Disputes Arbitration and Settlement Act 2006, Labour Unions Act 2006, Occupational Safety and Health Act, 2006 and National Tripartite Charter on Labour Relations.

A brief outline of what the union wants to negotiate is outlined. This is important to prepare management mentally for what to expect. The general secretary further writes a formal letter on a headed paper outlining the demands of the union.

The demands should contain specifics in terms of either figures or percentages and the “rationale” behind them. Adequate time, be given to management to prepare its position. However, the union should propose a tentative date when the negotiations are expected to take place.

Union executives should be well versed with the organization’s operations, Income (monthly, yearly), Expenditure (monthly, yearly), Loan portfolio, Profits/surplus (monthly, yearly), or even Losses. They should also know Capital investment (if any) Comparative figures in other firms in the same industry, Market rates of pay, and an idea or facts on the Economy of Uganda.

On the part of Management, the top executives represent the shareholders of the business. It comprises staff that is not unionized and is usually answerable to either the board of directors or proprietor (s) of the business. An organization that is owned either wholly or in part by the government, the board is the policy-making organ and oversees the day-to-day operations.

Management (with board) receives the union demands after which a top management meeting is convened on receiving the demands. The HRM presents the demands and preliminary discussion and evaluation of the demands take place.

For management to have strong negotiation grounds, a small Technical Committee of Management is formed to: –

Having taken the Final position, Figures or percentages are carefully detailed and a small team is selected to represent the management that should compromise at least the HRM and Finance Manager.

This team meets with the shareholders or the Board where applicable for guidance. Internal Negotiations/Consultations have to continue with necessary amendments.

This results in formal “Counter-Demand” or management proposals are sent to the Union Secretariat by the HRM. The counter demands should include; Dates, time, and venue expecting Feedback from Union listing specific issues that will be discussed and those to be discarded.

Either party will choose a chairperson and the meeting will decide whether to have one chairman; or two. In most cases, the chairman on the union side is a co-chairperson and also the spokesperson.

A board member, managing director, or general manager is normally the chairperson; with a member from management as a spokesperson for management. Only members with authority to commit the organization on the one side, and the union on the other side participate in the negotiations.

The negotiations will result in a Collective Bargaining Agreement (CBA) which spells out the steps by which the industrial relations processes are carried out.

It clearly states the Machinery for consultation, negotiation, or arbitration on terms and conditions of employment or for any other matters which arise between trade unions and employers.

It also spells out Negotiating rights, Facilities for trade union officials and disciplinary matters, and individual workers’ grievances. The agreement also covers terms and conditions of the employment, payments of all kinds, i.e. wage rates, shift allowances, incentive payments also holiday and fringe benefits such as pensions and sick pay, and various other allowances.

The Agenda and Negotiation Minutes

The agenda is drawn by the representatives of both parties during the consultation period. The agenda should contain all issues each party wants to discuss.

The minutes of the meetings should be taken by the joint secretary from either side. The two secretaries meet after the negotiations are over to harmonize and produce one document that is circulated to all members.

Negotiations or bargaining may take hours, days, and weeks depending on the issues being discussed. The venue should always be in a very neutral environment. It should be quiet, cool and friendly. Issues for negotiations are identified in a formal union executive meeting and documented. Management as a gesture of goodwill should always provide meals, soft drinks, water, teas, etc. to make members comfortable.

Collective bargaining needs ‘’good will’’ on both sides. It is a win-win position and therefore should be premised on ‘’mutual trust’’. It requires ‘’fact’’ and flexibility. Before the actual meeting takes place, a thorough’’ preparation must take place by both parties. The CBA is a contract; that is binding on both parties. There is no going out of the CBA’s signed when the minutes are produced and agreed upon. That’s why CBA’s become legal documents that can be used in the courts of law.

For more information, you may have to read the National Tripartite Charter on Labour Relations from the Ministry of Gender Labour and Social Development (MGLSD). You may also request a copy from Houston Executive Consulting via info@heconsulting.us

About the Author: Robert Mwesige 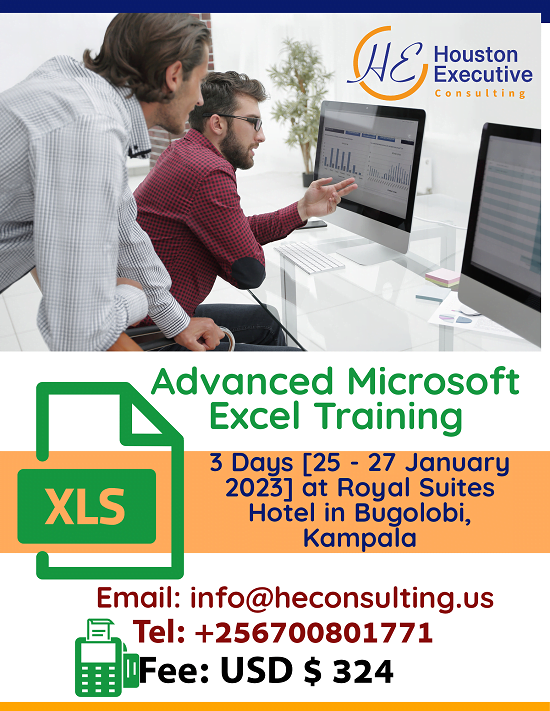 Since 90% of offices use #Microsoft Excel, getting certified in this tool can be highly beneficial. It shows employers that you are proficient, can easily perform Excel-related tasks in your #job and that you are dedicated to self-improvement & lifelong #learning.

File your annual reruns with URSB & URA in Uganda According to Section 134 of the Act requires annual returns to be completed within forty-two (42) days after the annual general meeting (AGM) of the year. A company that fails to do so within the stipulated time is liable to a default fine of UShs 500,000/= (Uganda Shillings Five Hundred Thousand). ... See MoreSee Less

Your company is required to file the Annual Returns at least once every calendar year. It is by law as spelled out under section 134(1) of the Companies Act. Call Houston Executive Consulting today to...
View on Facebook
· Share

About the Author: Robert Mwesige